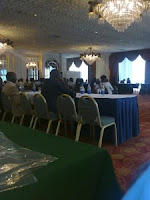 I’m not even sure what to start writing about. So much has happened in the last 5 days and there’s much to write about but I think I’ll do a separate post for each separate thing. So where to start? Like I said there’s much to be talked about, but we’ll do it in chronological order starting with Thursday.

So on Thursday I was in the office doing my work as the intern. So I was kinda free and monitoring twitter quite closely and what do I notice there? @savvykenya tweeting about something called the Microsoft Imagine Cup where she was competing. So I asked her what it was about and if they allowed spectators. She said yeah so I decided to take the afternoon off (being an intern does have its benefits though I was asked after 🙂 and go join her there.

So this was the first time I was meeting @savvykenya, but I read her blog and follow her on twitter, so I was rather nervous but I had recently decided to meet as many new people as possible so this was yet another opportunity. So I went!

The Imagine Cup E.A Regionals this year were being held at the Hilton. It had about 15 or so participants from all over the region, Uganda, Tanzania and obviously Kenya. I couldn’t believe so few people attended (forget even participated). I mean there was a fully paid trip to Poland to be won! And laptops! Not to mention the fact that it show cases what could be arguably the best in college and school computing. I saw some brilliant projects and some not so brilliant ones. Anyway I won’t go deep into what the competition is about(go read about it here and this is what @savvykenya had to say about it) but it was fun to see some examples of what the Kenya tech scene looks like.

Now on to the main attraction of this post @savvykenya. She’s really short!! That’s what you notice after you leave her lovely face. She kept me company the whole afternoon and part of the evening. We talked quite a bit. Well, actually we talked though most of the presentations (the sound was really really pathetic! I hope they fix it next year, I’ma be there). She has a really sexy voice btw. You’d never get that from her blog. I also learnt a lot about the blog scene here in Kenya.

Also she’s kind. I can’t really describe how I could tell that without looking broke but I could tell!:) Wait I can you might never met me, will you? She bought me a bottle of water. Yeah it cost only 35 bob but I was really broke that day! I’m young and work pro-bono, remember? She also took me to meet @sokoanalyst, with whom I had a rather long discussion about local tech and business. I learnt a lot from that discussion.

I’m realising that I’m not mentioning the most important thing about her, she’s friendly. Not many people would have comfortably spent the whole day with a total stranger. I like that. I like her. And I hope that we can be great friends going into the future. Yeah this post sounds ummh… I can’t find the word right now(fanatical?) but if you’re going to hate go suck a…!! Just realised I didn’t say this @savvykenya didn’t win but then again it had technical issues on that day so you really can’t be sure. She tries too stay anonymous so no pictures! I didn’t add this yesterday but despite her saying this about hugs she does hug really really well, warm and fuzzy. It helps she has a sizeable pair of boobs >:). Peace!!


(Picture taken from @savvykenya’s blog. It shows the room where the competition was taking place)