So yesterday I went for the screening of DAWA at the Goethe Institute right here in Nairobi. It was a free screening and I had time. Its a 9 min independent film shot in Kampala and directed by Mark Kaigwa, a Kenyan. I went there expecting to see, well, I’m not sure, an maybe just okay film but I was pleasantly surprised.

The film is a comedy about, I forget their names because I’m generally horrible with names, so I’ll say a man and his grandson, who are small time con men (they do the blind man and helper hustle). The grandson is discontent with the amount of money the blind hustle is giving them and wants to go shags to make some real money.

They go to shags and come up with a brilliant witch-doctor con that would’ve bagged them 60000 from a real doctor but… Go watch the movie because for me from here is where it really picked up. The twists in the story from here were unexpected, funny and well written and directed. For a 9 min movie it was bloody brilliant! No lie! 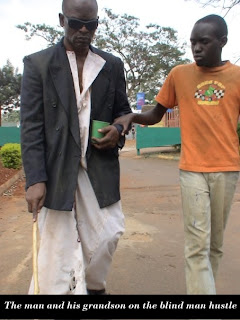 For me, and before we go on you should know I’m not a film critic or student so I can’t tell you much of the camera work, sound and quality of picture (which I thought were all good by the way), the high points were the story twists and the acting, which to my untrained unpracticed eye were very entertaining.

However, for me, the first askari’s (cop) acting didn’t really come up to the same level of the rest of the actors level. Also the doctor wasn’t as good as an actor as the rest of the crew but he was better than afore mentioned askari. They both could have done better.

This was the very first short film I’ve ever watched and also the first independent one. And it was. It shows that Kenyan film has great potential to do great things! If we keep producing movies like this, of this quality and professionalism we are in for some greater things in the future.

On that note the 7th Africa Movie Academy Awards (AMAA 2011) are in Nairobi next year and they are currently collecting entries. You can do that and find information about it here. I’m sure Mark Kaigwa will submit his film and I wish him luck! From my point of view it’s certainly award worthy. Were you there? Have anything to say? Sound off in the comments. Peace.