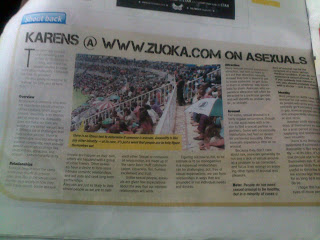 This is continuation from yesterday’s post, I told you I’ve been busy and there’s much to write about.


On Friday I was at work reading the paper, Nation, when I came across the an article on asexuality. Usually I don’t read the zuqka, mostly I peruse, prefer the Pulse by far, but asexuality was something I had actually talked about on my blog not so recently so I decided to read what they had to say about it.

Barely two sentences into the article(which already read familiar) I find myself mentioned! Yeah I won’t lie…I was over the fucking moon!!!! This was/is the first time I was ever mentioned in the paper and for some of my intellectual work no less(Not because I killed my step mum, commited suicide, or just appearing in some stupid ad :-)) was really gratifying.

Anyway @Joliea, with my permission, asked if she could repost my post and I said yes. So she did, and she had linked her blog with her profile on the zuqka website and they picked it from there. While discussing it on twitter it hit me -and quite a few other people- that I was not properly accreditted in that article -neither was at @Joliea but for her its a little bit more complicated considering she signed up for zuqka- because though my name was mentioned no one could really know that it was this blog in particular.


I have a creative commons license, which I wrote about here, that protects my work from copying without accreditation and permission. @Joliea properly accredited my in a fashion I was satisfied with(she mentioned me and linked back to the blog in her post) but the newpaper can’t do that (being tangible and what not). So that left me wondering if they should have put it in writing. Hmmm…complex issues I think.

Anyway this is what my license says about what I can do (Taken off the CC wedsite here):

Don’t get it wrong I’m glad the article appeared in paper, I don’t blog for money so its not about that, and that post was written to educate and it reaching a wider audience is probably. Its about being properly accreditted for something I actually spent time researching. Anyway @joliea wrote to them and we’re waiting to hear back. I hope they do it soon. I wonder what they’ll say because I can actually sue… I like that part 🙂 Peace!


(you can read the zuqka online article here, you’ll notice they still didn’t link it and that they just copy pasted it. Lazy, right?)