This is the follow up post on Random Acts of Kindness in which I promised to say something more about this incident:
Once I was walking down the steps of the brigde at Posta City Square when this old lady, some way a head of me, dropped her bag and it rolled down the steps. I watched expecting someone to give her a hand and pick it up for her but no one did. I waited for a bit but nothing. I had to get ahead of her and picked it up for her. She was already carrying a lot and if she had bent to pick up that bag she might have dropped a lot more. 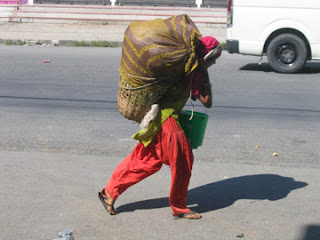 So a few days after this happened I happened to catch a conversation on radio about how women dress and whether that should be the thing that attracts people most to a girl. Whether a girl should judged on what she’s wearing. One person said that he doesn’t care what’s on the outside only the inside. And I thought what bullshit! Let me explain.

I’m a looker. What does that mean? It means that while I’m walking on the street I’m constantly letting my eyes wander (not that way, keep you thoughts clean) looking at everyone who I pass on the street. I do this for fun and to appreciate the beauty thats around me, there’s a lot to be seen btw, and on the rare times I see a well dressed mamasita (most girls dress well but I’m talking of stunning here) I notice that I immediately get assumptions about her, where she stays, her voice and what it’d be like to know her.

My point being is that we always form opinions based first on what we see so to say that you only judge someone based on what’s inside is just bullshit to me.

Anyway back to this lady and her fallen bag. I picked it up for her and as I handed it back to her I noticed that she was dressed rather shabbily and her odd assortment of bags she was carrying were rather dirty. I didn’t think much about it until I saw her the next day sitted some place on the bridge, begging. That’s when it hit me thats why no one helped her because she was a begger and shabbily dressed. I was disgusted at Kenyans (at least the ones on the bridge that day) These are the same people who will tell you that “I don’t look on the outside what’s inside is what matters” BULLSHIT!!!

Maybe I’m assuming wrong, perhaps there were other reasons that people just passed the lady but I can’t find a valid one for not taking 5 BLOODY SECONDS to pick up her fucking bag and give it back to her! NKT!! I’m even getting angry writing this so I’m going to stop. Remember to always take time to help someone! Comments always welcome. Peace