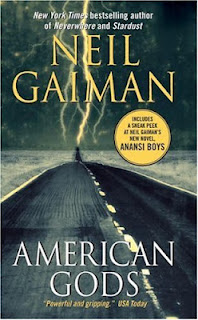 You know you’re reading a great book when at 3 am in the morning you read something that totally disgusts and scares you but you can’t stop because you just have to know what the next part of the book is going to bring before going to sleep. This is what happened when I was reading ‘American Gods’ by Neil Gaiman.
The book is about a guy named Shadow; mostly.  We first find him in prison about to be released on parole after 3 years in prison. He’s excited, and worried; he has this feeling of foreboding that a storm is coming. He gets released a couple of days early because his wife dies in a car crush. On his flight back home to bury her, he meets a man who goes by the name Wednesday who wants to give him a job, as an errand boy of sorts. In other words a sort a “guy” or “dude”, you know the way you say he’s my guy who… or my dude who… that type of person.
Now I don’t want to go any further because any more and I’ll be ruining the story for you. Now, one thing about this book is that when I began reading it I thought I had an idea of how it might flow, first of all because of the title, second because of how the first few chapters flowed and also because I’ve read a bunch of books about gods. Man was I so very, very, very wrong. And I’m so glad I was.
This book draws you in with its plot, dark humour and history. I can’t really say which genre that I can comfortably put this book in. I mean sometimes I’d read it and fill like I’m reading a horror. In fact there were parts that I was so scared and disturbed I refused to stop reading at that part just so I could go to sleep with some other image in my head. Other times the book would get so exciting and intriguing it was hard to put down.
The plot for this book is one of the most interesting I’ve ever followed. It’s just the story of our heroes but every couple of chapters there’s a random story, of myth that may seem random but somehow lends credence to the story without directly tying in with it.  So a little advice when you read this book, put any preconceived notions aside. Read it without any thought to where it’s going and how it’s going to get there because whatever you’re thinking is probably wrong.
I could go on and on about the book but let me just finish by saying that if you love thrillers, mysteries, fantasies and everything in between mixed with great writing and plot you’re are definitely going to want read this book. After you’re done, come back and tell me how right I was about it in the comments!! Peace!!
Btw here’s what was probably written as a summary on the jacket cover, I can’t be sure I was reading the e-book:
“Released from prison, Shadow finds his world turned upside down. His wife has been killed; a mysterious stranger offers him a job. But Mr. Wednesday, who knows more about Shadow than is possible, warns that a storm is coming — a battle for the very soul of America . . . and they are in its direct path. One of the most talked-about books of the new millennium, American Gods is a kaleidoscopic journey deep into myth and across an American landscape at once eerily familiar and utterly alien. It is, quite simply, a contemporary masterpiece”