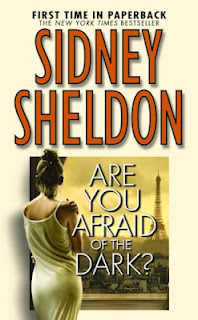 Now that I’m on holiday, I’ve finally gotten time to do some reading (when I’m not doing chores).  So in the last week, I’ve finished reading 4 books; the first of which is reviewed in this post. Hopefully, I’ll get time to do the other reviews soon.
Here is a blurb of the book I’ll be reviewing, ‘Are you Afraid of the Dark?’ by Sidney Sheldon:
In four cities across the world, four people die violently and mysteriously. The dead share a single crucial link: each was connected to an all-powerful environmental think tank. Two of the victims’ widows-accomplished artist Diane Stevens and international supermodel Kelly Harris-may hold the key to their husbands’ demise. Terrified for their lives, suspicious of each other, and armed only with their own wits and guile, they must join forces in a nightmare cycle of hunt-and-kill. At stake is the shattering truth about the tragedies that robbed them of the men they loved…and about an awesome conspiracy whose ultimate target is as big as the earth and as close as the air we breathe.
I thought I had read everything there was to read from Sidney Sheldon, but this one seems to have escaped me. He was my favourite writer, and I was devastated when he died because I felt the world had lost a literary genius. In addition to that, there were a bunch of books that he had ended in ways that allowed for awesome continuations one day. Fun fact, I get my first name from him.
In most of Sidney Sheldon’s books, he weaves a delicate story that combines characters’ pasts, futures and present. This enables us to see why and how certain characters make the decisions they do, how they came to where they are, and where they might be headed. He makes you empathize with his characters. In this book, however, he failed to fully connect the characters pasts with the storyline. He spent a little too much time with the female leads backgrounds that didn’t do too much to help the over-all story.
Finally, the plot in my opinion was not fully explored; the subject of climate change and human effect on it could have been explored in a much more detailed manner rather than the snippets we get throughout the book. The ending, in my opinion, was a little rushed; it felt to me like there was a deadline he was rushing to beat, or his publishers where breathing down his neck to complete it.  It could have been better.
Anyway, in my opinion, this is probably Sidney Sheldon’s worst work. However, do not misconstrue that to mean that the book isn’t worth reading; it is! It is fun, gripping and explores questions we should all be asking ourselves as human beings. It just doesn’t hold up to the standard I’ve set for Sheldon. Have you read it? Do you plan to read it? Let me know what you think in the comments below. Peace!!