I have a rather varied sexual life. I’ve done the experimental, the crazy and the bizarre. I’ve been accused of breaking my friend’s bed (I still call BS on this one, it just came up broken after I used it) and I’ve cockblocked people and been cockblocked. I can’t say I’ve done it all but I’ve done a lot, some of which I think back and just go, “The thirst y’all, the thirst”.

Anyway, sometime back a friend of mine was complaining of a rather torturous night she had when she had an old flame stay over. The dude wanted to hit it and he didn’t have a rubber… Idiot! The whole night was spent swatting away his hands like a persistent fly. At some point she left him on the bottom bunk and went to the top and he… wait for it… follows her there!!! Talk about tenacity. She might have let him hit it if he had a rubber but otherwise she wasn’t having it. Good for her!!! This story got us both thinking of the various tactics people use to get laid in campus and we both, with much laughter, reduced every method down to one of following:

“Hey want to come over and a catch a movie Friday/Saturday night?” This, I feel, is the most used one in my school. You invite a girl over for a movie; make sure it runs late and pray to your God that she doesn’t decide to head back to her room. This is especially effective if you leave on the other side of campus from her or one of the remote dwellings off campus. In fact I’d wager that over 90% of all movie watching requests from dudes to girls in campus are just attempts to get laid or build an amount of comfort in one’s presence for it to happen one day. This is how it usually goes down:

Boy: Hey. How you doing? What you up to this Friday? (Has to be a day that she has no early morning things to do therefore the weekend is a safe bet for a student. The greeting is just politeness)

Girl: I’m good. It’s been a long day. Friday? I have class all day until 5 then FREEDOM!!

Boy: You want to come catch a movie? I have *insert movie title here*

Girl: Sure. What time do you want me to come by? (Hope)

Boy: Nice, see you then.

Boy: (10 minutes later) Will you sleep over?

Now that very last line is the real clincher there, only for the very brave because it immediately reveals your intentions – you know, if the girl has half a brain. This question is actually saying one thing, “Do you want to fuck?” Well perhaps not so crudely said but he is asking for sex.

Anyway, during the movie hands will roam and hopefully lead to exciting stuff. I suggest picking a movie with as many sexual overtures as possible. There’s a series that a girl friend of mine says this of, “Why spend an hour pepeta’ing the jiko (fanning the flames) when you can pop in *the series* and be ready in 5 minutes?” She’s right, I’ve used it before ;). If you want the name of the series feel free to email me.
I remember this girl I was having a thing with, not dating, and I told her I was having some friends over for a movie. She asked who and I told her two girls from class. It was something that we had had going weekly long before I meet this girl. She seemed cool with it but then in the middle of our movie my door swings forward with so much force I thought it had been kicked in by the police. There she was standing, looking like she expected to find me in the middle of a threesome (not had one yet but I hold out hope still). I was livid.

This next one is a variation of the first one, it’s “Hey, I’ve got this new album from *artist/band name* come over we listen to it.” This is one of my personal favourites, tell you why in a bit. Same basic sequence as with a movie, but better. With a movie she can always pretend that she’s paying attention to it and doesn’t want to be interrupted, but with music you’re already talking (because no one just listens to the music) and therefore her face and stuff are facing you already so it’s easier to initiate things without that flimsy excuse. Of course she could get up and leave but hey, no guts no glory. This one has been pulled on me. A girl had me come over to listen to a rock album, she turned out to be terrible at several things but that’s a story for another day.

There’s one that is almost as popular as the movie one; asking a girl to go clubbing with you. This is good because it allows you to show her a good time and just how awesome you are to be around. It helps that she’ll be grinding against you all night and you have a good excuse to have your hand all over her body. Alcohol, if she drinks, will lower her inhibitions. I personally don’t like this one too much because of the alcohol part, I’m never sure if she would be me with otherwise and I like know she want this as much as me. Also there’s the fact that it kinda feels rapey and if she’s really drunk it is rape. As with every one of these methods so far I’ve done this one, she wasn’t drunk and it was on this occasion I was accused of breaking a bed the next day (Just to be clear I’m still denying this).

The Cut to the Chase

This one is one that takes a large set of balls. It almost rarely works with someone you’re not already sleeping with. Here is a conversation I’ve had before:

Her: I’m a little occupied with my friends.

I like this one because there’s no pretence and you know exactly what you’re both there for and don’t have to waste time on preliminaries. And just to be clear by preliminaries I’m not talking about foreplay which is really essential, just the other stuff mentioned before.
The Dinner
One that has come to my attention recently but isn’t on versions of this article elsewhere on the interwebs is inviting a girl over for supper. The trick here is to start cooking late so that she’s at your place rather late after being overwhelmed by your awesome cooking skills, while you eat you step up an awesome series. Why a series? Because it’ll already be late and you want to give her justification for staying over. Feeding her puts her in a really comfortable mood. Unfortunately, I’ve never experienced this one because I only ever stayed in a place I could cook in 2nd year and I had a girlfriend then but that doesn’t mean I don’t have a personal story.
I was in second year and I was at my friend’s place in the evening before I had to my place to cook. She mentioned that she was going to be really late coming from some meeting and she wasn’t sure if she’d find any of the cafes in school open and so I did the gentle manly thing and told her that I’d cook enough for the both of us and when she got back she’d find her food ready. I cooked rice, potatoes and carrots (with a secret recipe of course). I didn’t wait for her to be done with her meeting and ate alone. And kept her food heated. She came like 3 hours later looking for her food, which I served her, shirtless for some reason (I’m incredibly comfortable with my naked body, but I can’t really think of a good reason I had no shirt on). She liked it, a lot. “I like it when your abs are defined enough to look like this,” she said running her hand down my abs. “It’s really sexy!” Looking back I wonder if I missed a signal there.

The last one I’ll mention was brought to my attention by someone in my creative club when I told this story (because I’m a storyteller now). I call this one Divinely sanctioned. When the girl is at your place she gets stuck there because of naturally causes, here in Africa it’s just rain, but I imagine elsewhere snow could also be a reason. You take advantage of the cold and darkening sky (there’s something about the dark, right?) and initiate something. Clearly God wanted you to get laid because why’d he trap a beautiful girl in your room right?
These are the main methods I’m aware of, I like to think all others are just variations but if there’s one you feel I’ve missed feel free to mention it in the comments. To cap this off I leave you with a picture of a poster that’s outside my door and the warning to rubber it up, stay sure, safe. Anyone who wants to have unprotected sex is more than just careless, they’re dangerous. Wrap it up. Peace!!! 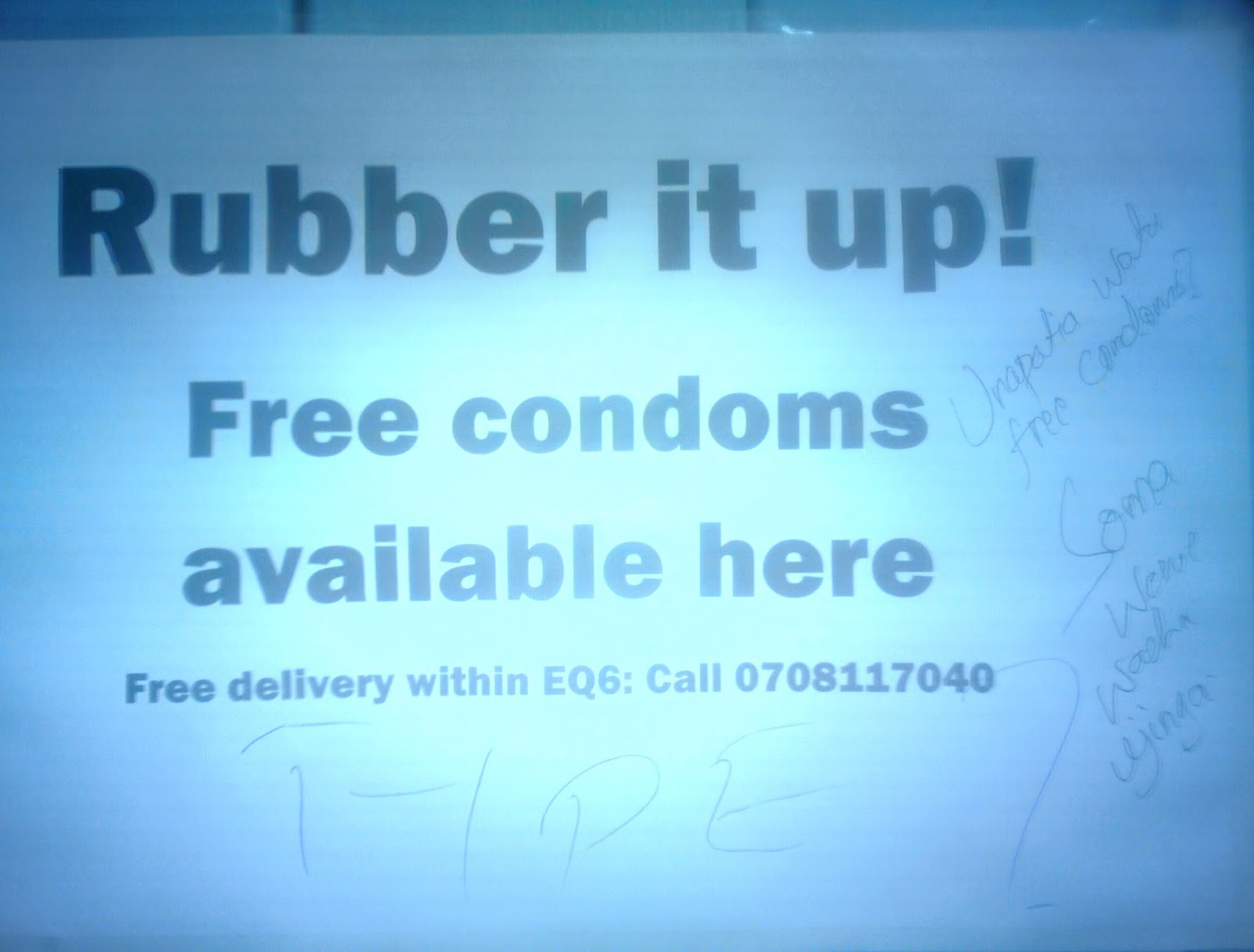