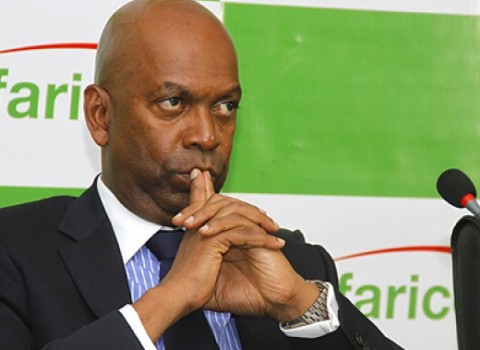 Bob Collymore’s contract is up for renewal in 4 months, and he’s yet to hear from the board, of which he’s a part of, whether he’s coming back. From the Business Daily:

Safaricom chief executive Bob Collymore has not heard from the company’s board of directors about the renewal of his employment contract, which expires in four months’ time.

Mr Collymore’s contract ends in August, having been extended for two years in 2013. There is a strong expectation it will be renewed again in the absence of any overt succession planning.

I wonder what the board is waiting for on this. Everyone agrees that since Collymore took over, the company has only moved from strength to strength, particularly in non-voice/sms revenue.

Perhaps it has something to do with this:

Telecoms operator Safaricom cancelled a multi-million dollar tender it had awarded to Mobinets SAL Limited after it found out that the Lebanese firm bribed its employees to secure the lucrative contract, a Nairobi court has been told.

Safaricom says in papers filed at the Milimani Law Courts that Mobinets colluded with its employees to ensure the tender went to the Lebanese firm.

Mobinets, which went to court to get Safaricom to honour the contract, apparently has already poured about a billion shillings in honouring the contract:

I fall squarely on the side of Safaricom here. Though questions arise about which employees are these that Mobinets bribed, and does it have anything to do with the recent exit of twofour executives.

Meanwhile, I imagine that the board has some very difficult questions for Collymore on just how these oversights happened on his watch and perhaps this is what’s holding up the the renewal of his contract. I’ll be keeping my eye on this. Peace!!!